It was June 28th, 2001 when I decided to pull the trigger on volunteering for the 2002 Winter Olympics in Salt Lake City.  It really never was a question – I always thought it would be a great and memorable experience to volunteer to help with the Olympics – a once in a lifetime opportunity.

The interviews and evaluation process to determine where our talents and abilities could be best used was quite impressive.  I thought for sure they would ask me to either be a bobsled test pilot to make sure the track was in good shape or the guy at the starting gate of the Giant Slalom or Downhill events.  No such luck.  I was given, however, a pretty cool assignment working with the main ice skating events.  I was called to serve as a Photo Marshall overseeing Sho

As a Photo Marshall, my job was to keep all credentialed photographers in line, make sure they kept all the rules, manage the “Kiss and Cry” (where the skaters sit with their coaches/trainers waiting for their scores) and make sure they didn’t harass the athletes trying to get a good or unique shot for their publications.  It was kind of neat when friends would say to me, “I saw you on TV last night!”  Because I stood close to the edge of the ice, when skaters would pause during their performance, if the pause was on my end of the ice, I could usually be seen standing in the background.  I kinda felt a little like a celebrity – stupid, I know.

So when the 2018 Winter Olympics in PyeongChang, South Korea started in February, I was really excited to watch all I could and dream of the glory days of 2002.  I must admit, I was a little confused by several news reports stating it was just too cold for the athletes and spectators.  It’s been so cold that several events have been rescheduled hoping for better weather conditions.  Now I get it – for the athletes to have an opportunity to perform at their very best, the weather conditions need to be ideal.  But I can’t help but think, “What part of ‘Winter’ do you not understand?”  Surely, with today’s sophisticated equipment and high tech winter wear, a little colder weather shouldn’t throw some in a tail spin.  I then, of course, began to reflect on the level of my personal preps as it relates to cold weather conditions.

I love being in extreme cold conditions IF I have the proper winter gear, but there is nothing more miserable than not being properly equipped with warm clothing and being chilled to the bone.  Over the years, I have learned the importance of layered clothing to help in assisting the regulation on proper body temperatures as well as allowing moisture to wick off.  Rather than wearing just a large, warm coat, wearing several layers of lighter clothing makes all the difference.  You don’t want to get too hot where you begin to sweat – moisture can greatly reduce the insulating functionality of you winter gear and potentially allow hypothermia to set in.

You don’t want to mess with hypothermia – it can be a killer.  A number of years ago, I was on one of our many backpacking trips to the Wind River mountain range in Wyoming.  The fishing in those high mountain lakes is to die for! 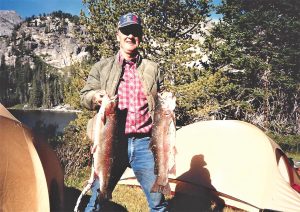 There was a group of six of us and we were on the last few days of our week-long trip.  We would take topographical maps and compasses with us as we seldom were hiking on any designated trails.  We had to cross rivers frequently holding our backpacks above our heads.  On the other side of each river, we would take an hour break, build a big fire, strip down and try to dry off our clothes.  You don’t want to try to hike, especially uphill, with wet pants – it will totally exhaust you as they constantly are pulling on your legs.

On our next to last night, it poured on us all night long.  It was one soggy mess when we got up the next morning.  After breaking camp, we began bushwhacking through the dense forest to get to a specific ridge we needed to climb to find our next lake.  Pushing our way through the rain soaked brush quickly made us as wet as if we had just crossed a river.  We knew it would be several hours before we would be out of the wet brush so it didn’t make any sense to try and dry off.

As we reached the base of the steep ridge we needed to climb, my father in law made a decision that almost cost his life.  Rather than have his wet pants pull on him as we climbed the ridge, he stripped down and put on a pair of nylon gym shorts.  This looked like a great idea but the rest of us decided not to follow suit.

As we began climbing the ridge, heavy clouds moved in and it began to snow.  Keep in mind, its mid-August and we weren’t properly prepared for winter weather.  Even though it was getting cold, the hard work of climbing the ridge was keeping us warm.  The higher we climbed, the more it snowed.  In addition, as we approached the top, heavy fog set in.  Once we reached the top, we knew we were in trouble because the ridge had some steep drop offs and cliff areas and we couldn’t tell how close to the edge we were.  Our maps and compasses did us no good since we couldn’t see more than a few feet in front of us.

We decided we were going to have to bivy on the top of the ridge which was above the timber line as the wind was picking up and blizzard conditions were intensifying.  During this ten minute decision making break, my father in law decided to put his wet pants back on.  The tent we chose to set up was a 4-man North Face dome tent.  As soon as we got it set up, the six of us pilled in to get out of the wind and snow.

After zipping the tent door closed, we all looked at each other wondering how long we would have to hole up in the tent waiting for the storm to pass.  If it was going to be a while, it was going to be pretty uncomfortable in that a 4-man tent really only accommodates 3 men.  Now there were six of us in very cramped conditions.  As we sat there, I noticed that my father in law was shaking uncontrollably.  The rest of us were wet and cold but not shivering anything like he was.  We quickly realized he was suffering from hypothermia.  Hiking up the ridge in the cold, wet conditions in his gym shorts had allowed much of his body heat to escape through his exposed legs.  Then when we stopped at the top, putting on his wet, cold pants just made things worse.

We knew we needed to get his wet clothes off him and put him in a warm, dry sleeping bag to try and raise his body temperature.  Luckily, I had made a big investment just before this trip.  I had purchased a new down mummy sleeping bag that had a Gore-Tex liner.  Due to the previous rainy night, everyone else’s bags were wet.  I quickly unzipped the tent door and went back out in the storm to fetch my sleeping bag off my backpack.  As soon as we got him in the bag, he lost consciousness.  We all tried to lie down close to him to provide as much heat as possible.  The only way we could accomplish this was to lay on our sides due to the cramped conditions.

During the next 18 hours we were confined to the tent, my father in law came to a couple of times and we tried to get some hot soup down him (this almost caused carbon monoxide poisoning using one of our backpacking stoves inside a closed tent). The wind was blowing so hard at times that the tent was being pushed down on us.  We prayed hard the tent would hold up and protect us from the storm.  I happened to be lying on my side closest to the tent door.  I was so grateful at about 3:00 AM when I unzipped the door just enough to take a peek outside and I saw wonderful, bright stars in a clear sky.  The storm had finally passed! 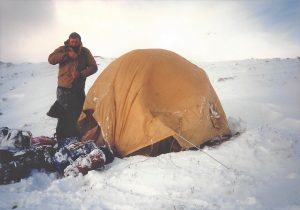 At first light, after getting him dressed, we wrapped the sleeping bag around my father in law and sent him down the hill with two of our group to help him.  The rest of us packed up the tent and carried the extra backpacks back down the hill to where there was some timber.  There we built a huge bonfire to warm everyone up and dry out our clothes and gear.  After resting for several hours and eating the last of our food, we knew we had a big challenge ahead of us.  We had scheduled our Indian guides to meet us at a prearranged pick up location to take us out across the Indian reservation.  My father in law was as weak as a kitten and even carrying his pack for him, it was going to be very difficult for him to hike the 20 miles we needed to go the meet our ride.  Luckily, I was in much better shape back then and I told the group I would go ahead because I was afraid we would miss our ride.

I was late as I entered the clearing where our ride was to meet us.  In fact, they had waited almost an hour and had given up on us and were pulling out of the clearing.  I ran after them yelling and waving my arms and luckily they saw me in their rear view mirror.  It took almost another two hours for the rest of the group to arrive, but we all made it home safely, much wiser about how to handle adverse weather conditions and the life threatening effects of hypothermia.

More than 1,000 deaths occur each year due to hypothermia, most of which could have been avoided had the proper gear been used.  Bottom line – You don’t want to mess with hypothermia – it can be a killer.