I had a discussion with my son-in-law the other day about human behavior during times of extreme emotional stress and tragedy.  He works for a local police department where he also is on the SWAT team as well as serving in the Army Reserve.  Over the years, he has seen and experienced far too many tragic and stressful situations, each of which seems to teach a new lesson on human behavior.  I truly sympathize with and fully support our military and law enforcement as they are constantly putting their well-being and lives on the line to protect us and help maintain the freedoms we often take for granted.

My son-in-law was explaining to me the very rigorous training he is required to constantly participate in, much of which is psychological training on how to handle stressful situations and act or react in a well thought out manner.  When one’s life is on the line, and the adrenaline is pumping, our bodies naturally act in a manner that under some circumstances can cause more potential danger.

For example, in a situation where a weapon is drawn in an attempt to defend one’s life or the life of another, it is very common for tunnel vision to set in and one can become unaware of their surroundings – not a good thing if you’re looking for the bad guy.  Keeping totally aware and constantly scanning your surroundings can in certain circumstances mean the difference between life and death.

There is another naturally occurring phenomenon that is very common during stressful situations and you don’t have to be a police officer to experience it.  It’s called the Normalcy Bias.  This bias can place us in grave danger when we’re faced with something traumatic.  Simply put, it causes our brains to insist that all is okay.  Everything will return to normal.  For most of us who have never faced true peril, Normalcy Bias tells us that nothing bad will ever happen. “This is America!,” some people insist when told about the possibility of a deeper Depression or hyperinflation.  Incredibly, the most obvious warning signs are ignored.

This explains why so many Jews continued living in Germany, even after they were forced to wear identifying yellow stars and discriminatory laws were passed against Jewish people.  Life had been so good for so long that, surely, things would get better.  Jews who could have easily afforded to move out of the country stayed, and perished.

Oncoming hurricanes and other disasters elicit similar reactions.  We simply expect life to go on as it always has, and our brains are wired to accept that and nothing else.  A driver attempts to cross a flooded river.  Thousands of New Orleans residents faced with Hurricane Katrina refuse to leave the city, and city officials don’t even make an attempt to evacuate them.  One survivor from 9/11 tells of going blind as she saw dozens of human bodies hitting the ground outside the Twin Towers.  Our brains can accommodate billions of bits of information each day, but apparently there are some things too terrible to comprehend.

Those of us who believe in preparedness, whether beginners or veterans, know the frustration of trying to convince loved ones that the future is not at all secure, but the Normalcy Bias isn’t something we can debate.  It’s not based on logic or rational thought.  It’s the brain, doing its best to help its human owner deal with terrifying events and possibilities, as well as with escalating situations whose logical, final outcomes can’t be accepted.

Let me share with you a story of a woman who almost lost her life as she allowed the Normalcy Bias to dictate her behavior.

“I am going to tell you a true story of personal tragedy.  It was one of the most valuable learning experiences of my life.  I have one regret…I wish I would have understood a strange phenomenon called the Normalcy Bias.”

“The formal definition is the phenomenon of disbelieving one’s situation when faced with grave and imminent danger and/or catastrophe.  One tends to over focus on the actual phenomenon instead of taking evasive action and enters a state of paralysis.”

“On October 27th, 1993, my home, along with 350 others in Laguna Beach, California burned to the ground.  It was our first house.  My husband and I hadn’t even unpacked all our wedding gifts.”

“Early that afternoon, I went home to evacuate.  My husband was out of town.  As I made the long drive to the top of the hill where my house overlooked the ocean, the scene was surreal.  Most of my neighbors were on their roof tops, watching the fire burn along the north side of the 133.”

“The fire was raging less than one thousand feet across the gorge, yet no one was packing their cars or preparing to evacuate.  They were standing, like deer in the headlights, facing their inevitable doom.  I hit the accelerator, pushing my old car to the limits of its capabilities, desperate to get to my home so I could get my important things.  I promised myself to be out in 30 minutes or less.”

“But something strange happened.  I went from being focused on an efficient evacuation, to a complete state of disbelief.  For the next three hours, I paced frantically back and forth, glued to the TV.  I was biting my nails while wondering if it was really worth the trouble to pack up my car since the chances of something like this actually happening to me were so slim.  Hello!”

“That, my friends, is the normalcy bias in action.  I was paralyzed with indecision even though the facts of my situation were indisputable.  I learned many life lessons with that experience.  I no longer hesitate to evacuate immediately when we are threatened with a natural disaster, which is about once every other year in California.”

“In some ways, I feel like Americans are under the influence of the normalcy bias as it relates to the state of our economy, our currency and the security of our nation.  Convincing facts are piling up like fire across the gorge.  All it will take is one little shift in the wind to send us into a tailspin that is incomprehensible.  Yet, most people I speak with don’t seem the least bit concerned.  Could this be the normalcy bias at work?”

“My story didn’t end well.  I was jolted back to reality 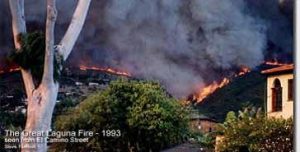 when I literally felt the heat from the fire.  During the last 10 minutes in our home, I was too flustered to function.  In the end, I left with only the dogs and my life, trying to escape the 100 foot high wall of flame that was swallowing homes.”

“I have always questioned my behavior that day.  Why did I ignore my initial instinct to get out?  Why did I go into such a powerful state of denial?  Now, I know—it was a textbook case of the normalcy bias.”

“I could be completely wrong about the state of our nation.  I am no expert.  But I see signs everywhere and I can’t shake the feeling that we are in for a big shakedown.  I have vowed to engage far more aggressively to get prepared for an emergency, whatever it may be.  Maybe next time, I won’t be caught with my proverbial pants down.”

“The normalcy bias is alive and well during every crisis and natural disaster.  Just look at the events of hurricane Katrina and the BP oil crisis or any atrocity.  Now, I realize that the normalcy bias played a huge role in individual behavior, corporate behavior and the behavior of our government.”

“Things would have been much different for me Oct. 27, 1993 if I had known about the normalcy bias.  If you haven’t been through a major disaster or crisis, it’s difficult to comprehend.  Understanding this phenomenon could save your life.  Use it as a resource to get prepared and to overcome the denial that happens when faced with crisis, so you can act with a clear head and possibly save your life.”

None of us want to think we’re in a state of denial, assuming we’re thinking with a clear head and making the best decisions for our families.   Nevertheless, stories like this are far too common to dismiss.  The first step in preventing normalcy bias causing undesired consequences in our lives to recognize it exists and talking about it as families so together we can make the right decisions with the right information that could literally save our lives.