Have you ever seen a $1,000 bill?  The United States used to print $1,000 bills picturing our 22nd and 24th president, Grove Cleveland.  It would be very rare if you had seen the actual note as the U.S. stopped printing them by 1946 in an attempt to help thwart illegal activity and the laundering of money.

Even far more rare were the $5,000, $10,000 and $100,000 notes that were used primarily for large real estate transactions or by banks or other financial institutions to transfer large amounts of money.  Remember, this was way before the digital currency era had even been dreamed about and there needed to be a way to transfer funds for large transactions.

Since the largest bill most of us have ever held in our hands in a $100 bill, it seems inconceivable that a $100,000,000,000,000 (one hundred trillion) Zimbabwe dollar note was a common denomination in 2008.  What is even harder to grasp is that the one hundred trillion dollar note was worth only 40 cents in US currency, enough to purchase three eggs.  How is this possible?  Well, it’s all a result of hyperinflation.  In June 2008, the annual rate of price growth in Zimbabwe was 11.2 million percent. The worst of the inflation 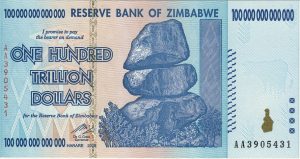 There have been 57 episodes of hyperinflation throughout the world in the last 100 years including countries such as Hungary, Germany, Taiwan, France, China, Argentina and many others.  It’s hard to imagine prices doubling every 15 hours as experienced in Hungary in 1946.  How could people cope?  The moment families would receive their paychecks, they would race to the stores in an attempt to spend it all by purchasing essential needs before prices went up again.

We are currently seeing the devastating effects of hyperinflation repeat in Venezuela where the inflation rate is expected to hit 13,000% this year.  According to the Wall Street Journal, “prices are doubling in Venezuela every few weeks, confounding cash-strapped Venezuelans who are scrambling to find a way to pay for basic transactions.”

“The problem is that in a country as broke as Venezuela, the government can’t print enough bills or pay the hefty fees for commercial printers to supply them. Paying with plastic? Credit-card readers seldom work.”

“Yorli Uzcategui, who sells vegetables from a streetside stall, keeps notebooks with handwritten IOUs and spends his off-hours chasing customers through chat groups on WhatsApp to get repaid via bank transfers.”

“‘If I don’t do this, I’ll sell nothing,’ the vendor said as he bagged lettuce on a recent day.”

“Things are expected to get only worse this year. The International Monetary Fund estimates an economic contraction of 15%, which means that by the end of 2018 the economy will be half of what it was in 2013. And inflation will hit 13,000%.”

“Following in the footsteps of Brazil, a slew of post-Soviet countries, Venezuela has become the 57th recorded case of hyperinflation, according to Steve Hanke, a Johns Hopkins University economics professor.”

How is it possible for a typical family to cope with the run-away pricing hyperinflation causes?  In today’s society, it’s almost impossible to transact business or purchase the essentials of life without money.  Even with the recent explosion and popularity of cryptocurrencies, one must initially purchase these digital currencies with conventional money.  As these fiat currencies lose their value, less and less cryptocurrency can be purchased, if one makes the assumption these digital currencies are indeed a solution to hyperinflation.

In the meanwhile, families in Venezuela have to rely on a more time tested method on survival – bartering.  The Wall Street Journal also addressed this issue.

“One U.S. dollar now fetches around 236,000 bolivars on the street, around 80 times what it bought at the start of last year. Five years ago, that could buy a small apartment; now it barely covers an appetizer at lunch.”

“’The authorities have lost control, they can’t stop creating bolivars even if they wanted to,’ said Omar Zambrano, a former economist for the Inter-American Development Bank. ‘This ends in two ways: Either we adopt the dollar or we go back to bartering.’”

“That’s what Marina Fernandez, a professor of architecture at a Caracas university, has done, finding out that some people will take, yes, the humble egg. When she didn’t have enough cash to pay for parking, she handed over two eggs. Her university department, short of cash, paid a computer programmer with a carton of eggs.”

“Ms. Fernandez said onions or bananas, for some reason, just won’t do. ‘If you’re going to receive food as payment, the people want it to at least be a protein,’ she said. ‘The egg is perfect.’”

Whether it is through a severe recession, a depression or some form of hyperinflation, as an economy begins to implode, there are typically three types of currency that can be relied upon, at least for a period of time.

FIRST – CASH.  I’m talking about actual greenbacks in your possession.  A minimum of $1,000 in small bills with the goal of several months’ worth to cover all your needs during that period should be on your priority list.  In the event of a banking holiday, grid down scenario or rapid onset hyperinflation, you will need cash to transact any typical business.  Without cash, gas for your car, food for your family, payment for utilities or any other essentials simply won’t be possible, regardless of how much money you may have in the bank.  Under these circumstances, cash may only have value for a few weeks or maybe a few months before it becomes basically worthless paper.  You can’t eat it, you can’t wear it and you can’t get enough of it together to burn to keep you warm.

SECOND – PRECIOUS METALS.  Once again, in your possession.  You see, the primary cause of hyperinflation is tied to any given government issuing a fiat currency that is backed by nothing other than the government stating it’s worth and value.  If there is no anchor to some form of asset with intrinsic value, the worth and value of such a fiat currency can drift off course just like a ship without an anchor and the outcome is never favorable. 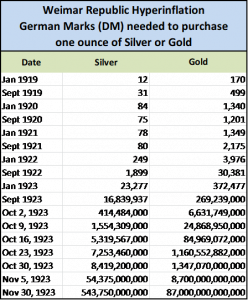 Just take a look at this chart of what happened during the early twenties in the German Weimar Republic.  Keep in mind, the price of silver and gold did not go up, it was the value of the German Mark that decreased significantly.  Over the last century, the value of gold and silver has remained relative constant as compared to the fiat currencies that are extremely volatile.  This is why precious metals are an excellent form of currency, especially in times of hyperinflation.  This form of currency may also only be valid for a number of months until things deteriorate enough that one realizes most people will not trade food for gold or silver.

THIRD – FOOD.  This is the most important of them all.  If push comes to shove, there will be nothing more valuable than food.  All of the greenbacks and precious metals in the world will do you no good if you can’t exchange them for food.  In fact, think of it this way – Is there anything you currently own or anything you could own, that you would not be willing to trade for food if it meant the survival of your family?  The obvious answer is NO, in fact we would trade all the wealth in the world if that’s what it took. Due to its great value, it will be the ultimate bartering currency.  If one has prepared with extra food storage, not only will they be able to feed their family, but they will have access to all other goods and services they may need – simply by bartering with their excess food.

Even if the only reason one purchases food storage today is to hedge against future inflation where the cost of the same amount of food may be ten-times as much, you just can’t go wrong by storing long-term food storage for your family.  Remember the value of an egg.