Have you ever heard of the Minnesota Starvation Experiment?  Most people have not and it’s a shame because there is a wealth of knowledge to be gained in the findings of this very interesting experiment.  Here’s how it all came about.

One of the greatest killers of World War II wasn’t bombs or bullets, but hunger. As the conflict raged on, destroying crops and disrupting supply lines, millions starved. During the Siege of Leningrad alone, over a thousand people a day died from lack of food. But starvation also occurred in a more unlikely place: Minneapolis, Minnesota. It was here that, in 1945, thirty-six men participated in a starvation experiment conducted by Dr. Ancel Keys.

The basic design of Keys’ study was simple: to starve some subjects (or, at least, bring them to near starvation) and then refeed them. To achieve this in a controlled, scientific fashion, Keys envisioned a year-long study divided into three parts: an initial three-month control period during which the food intake of the participants would be standardized, followed by six months of starvation, and then three months of rehabilitation.

To find subjects willing to put themselves through such prolonged deprivation, Keys recruited volunteers from among the ranks of conscientious objectors — young men who had chosen to join the Civilian Public Service as an alternative to military service. Many of these conscientious objectors, though not all, were members of the historic peace churches (Brethren, Quakers, and Mennonites).

Keys’ staff prepared a brochure designed specifically to appeal to the idealism of these young men. Its cover showed three young children staring at empty bowls, above the words: “Will you starve that they be better fed?”

Keys carefully screened these applications before finally selecting thirty-six young men who he felt would be tough enough, physically and mentally, to endure what would be demanded of them during the experiment. 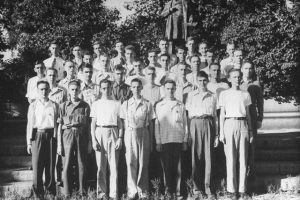 45, Keys abruptly cut the food intake of the men down to 1,570 calories per day. The starvation phase of the experiment had begun. He carefully controlled the amount they ate by serving them two meals a day prepared and weighed by the cook he had on staff. He designed the meals to be carbohydrate rich and protein poor, simulating what people in Europe might be eating, with an emphasis on potatoes, cabbage, macaroni, and whole wheat bread (all in meager amounts). Despite the reduction in food, Keys insisted the men maintain their active lifestyle, including 22-miles of walking each week.

Effects of the reduced food intake quickly became apparent. The men very soon showed a remarkable decline in strength and energy. Keys charted a 21-percent reduction in their strength, as measured by their performance on a back lift dynamometer. The men complained that they felt old and constantly tired.

Next a kind of mental apathy took hold of the subjects. The men all had strong political opinions, but as the grip of hunger tightened, political affairs and world events faded into irrelevance for them. Even sex and romance lost their appeal. Food became their overwhelming priority. Some of the men obsessively read cookbooks, staring at pictures of food with an almost pornographic obsession.

Meal times became the high point of their day. They grew irritable if they weren’t served their food exactly on time, or if they had to wait too long in line. Although the food was quite bland, to the men it tasted delicious. They lingered over the food, savoring every bite. Often they “souped” their meals — mixing everything with water to make it seem as if there was more.

In between the two meals, Keys allowed them unlimited chewing gum, water, and black coffee, and the men took full advantage of these privileges, chewing as many as 40 packs of gum a day and downing up to 15 cups of coffee. 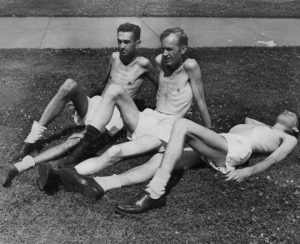 The depth of the psychological strain experienced by the subjects astonished Keys. Although they had all seemed fully committed to the experiment before it began — Keys had screened for this specifically — cheating became a major issue as an almost uncontrollable urge to seek out food gripped them.

None of the men had been overweight to begin with, their average weight during the control period being only 152.7 pounds. So as they shed pounds they rapidly grew skeletally thin, their bones protruding from their skin at sharp angles. Keys carefully analyzed and recorded the other physiological changes they experienced.

He found that the heart rates of the men slowed dramatically, from an average of 55 beats per minute to 35. This was their metabolism slowing down, attempting to conserve calories. The frequency of their bowel movements fell to about one per week. Their blood volume dropped ten percent, and their hearts shrank in size.

Perhaps because of the amount of water they were drinking, the men developed edema (retention of water). Their ankles, knees, and faces swelled — an odd physical symptom given their otherwise skeletal appearance.

The skin of some of the men developed a coarse, rough appearance, as a result of the hardening of their hair follicles. Other effects included dizziness, muscle soreness, reduced coordination, and ringing in their ears. But the creepiest change, which occurred in all of the men, was a whitening of their eyeballs as the blood vessels in their eyes shrank. Their eyes eventually appeared brilliantly, unnaturally white, as if made out of porcelain.

From the men’s point of view, the most uncomfortable change was the lack of body fat. It became difficult for them to sit down for long periods of time because their bones would grind against the seats. They also felt cold all the time. 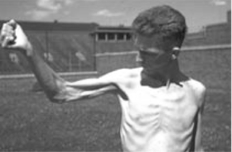 After six months of starvation, the men had lost almost a quarter of their weight, dropping from an average of 152.7 pounds down to 115.6 pounds.

Why is this information relevant to us today?  Primarily because of the vast amount of misinformation that exists as to what constitutes an adequate food supply.  The majority of food storage plans available today provide around 1,100 calories per day with some as low as 800 per day.  Emphasis is placed on number of meals, or servings with no real focus on total food value measured by calories.

Keep in mind, these men were fed 1,570 calories per day and consider what happened to them.  When the time comes for us to use our food storage, chances are it will be a stressful time and that’s the worst time to add to that stress by not having enough food on hand to properly feed your family.  Something we should all consider as we make plans to provide for our families in times of need and to insure our food storage plan will provide enough food value to keep our families from starving.